Celebrating One Year of Giving with the Generosity Network

Over the past two years we have seen communities come together in record numbers to give back and support those who needed help. According to the 2021 Annual Giving USA Foundation Report, charitable giving rose 5 percent to more than $471 billion in 2020, a record level. In 2021 at PayPal, we saw our community of customers and employees give more on GivingTuesday than ever before, with more than $188 million processed on a single day. This impact is the reason why at PayPal we’re always looking for ways to make giving easier for people. We were so inspired by the rising popularity of peer-to-peer crowdfunding during the pandemic that a year ago we launched the Generosity Network – a way to enable our U.S. customers to create customized fundraisers for themselves, their communities, charities, or causes they are passionate about. And it all comes together in the PayPal App and its new, centralized design for giving.

Now, we’re celebrating and recognizing a remarkable year of the Generosity Network, including the compassionate and charitable people who abundantly gave, and the scores of people, families, and communities they helped. We saw an influx of charitable contributions from our customers to important and purpose-driven causes, such as one campaign where a woman raised over $18,000 to fight cyber harassment, and another where a man raised more than $5,000 to aid low-income families.

Since its launch in November 2020, the Generosity Network has helped raise millions of dollars – more than $15 million since October 2021 alone - with fundraisers that range from disaster relief in Haiti to life-saving surgeries in the U.S. We built on that success in September 2021 when we expanded the Generosity Network’s reach through the launch of the Generosity Network for Charity, which offers users the option to crowdfund in support of charities enrolled with PayPal Giving Fund.

As we celebrate this one-year milestone of the Generosity Network, we’re only more compelled and eager to continue powering a world of giving and goodwill. But first, we’re pausing to reflect on the meaningful and powerful journey we’ve had to date.

The concept of the Generosity Network was inspired by the climbing popularity and prevalence of peer-to-peer fundraising – we saw the increase in individuals creating personal fundraisers for themselves or others in need. With Generosity Network, we’ve seen our PayPal community create nearly 190,000 fundraisers so far. And in 2020, the average amount of money raised for each participant of peer-to-peer fundraising rose by 83% from 2019, according to the 2020 Peer-to-Peer Thirty Survey conducted by the Peer-to-Peer Professional Forum.

Alongside the spike in individual fundraising engagement amid the pandemic, charitable organizations likewise saw an increased need for more people and community members to give to their causes.

According to Giving USA’s 2021 Annual Report on Philanthropy, individuals made a real difference in charitable giving in 2020 as giving by individuals in the U.S. rose by an estimated 12.8% in 2020 from 2019, to $16.22 billion. Initially inspired by this giving boom, we are thrilled with the adoption of the Generosity Network, which operates as an engine where customers can seamlessly connect to those who need a helping hand and millions of others who can give back by offering their support.

The way the Generosity Network has been set up to work makes it simple to give since it’s a place where PayPal customers can create fundraisers for themselves or for causes to help others, such as individuals or small businesses. The platform helps customers find causes located everywhere from their local communities to the other side of the world. Also, as of October this year, customers can create fundraisers on behalf of charitable organizations – and do so without any fundraising limits.

We’re excited that the Generosity Network has made good on its benevolent mission to lend a helping hand to people, businesses, and communities in need.

And this all came together in the PayPal App. With its new, centralized design for giving in the Payments hub, and a new giving tab where people can either create, contribute to, or search for a fundraiser, the app has enabled the Generosity Network to offer a level of accessibility and ease that has helped propel such generous giving in just one year, as well as Network growth that has expanded into Germany, the UK, Canada and Australia to spark even more giving on a global scale.

We are so grateful to our PayPal community that made this abundant giving possible. As 2022 approaches, we hope to continue encouraging and expanding the kind of giving that helped transform countless lives and communities in 2021. Here’s to the one-year anniversary of the Generosity Network, a platform changing the world one cause-oriented fundraiser at a time. 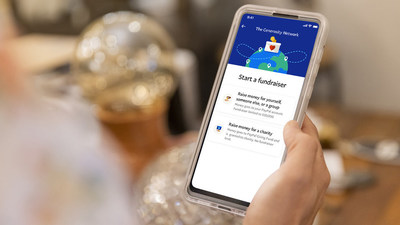 More Ways to Give Back This Holiday Season